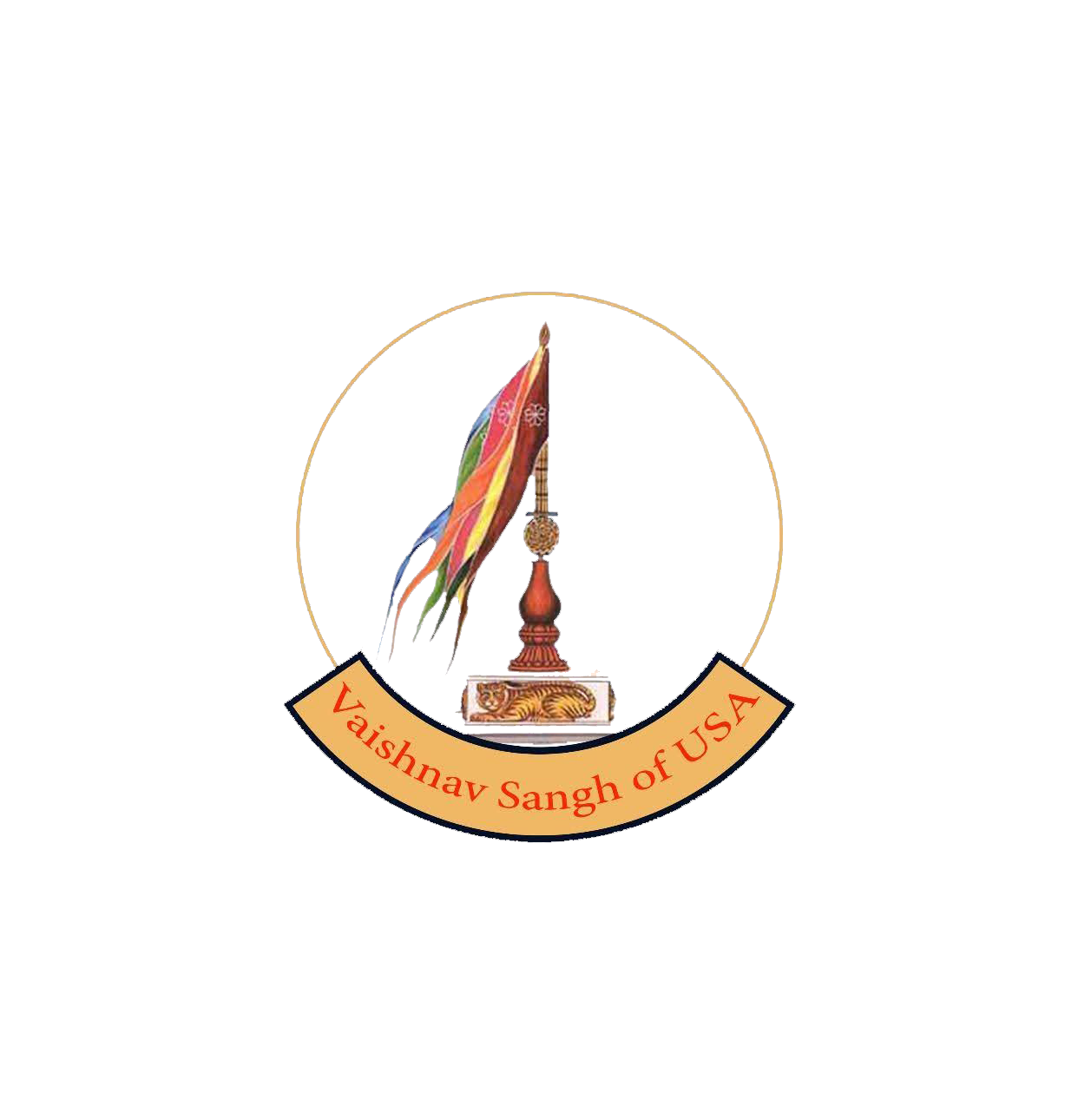 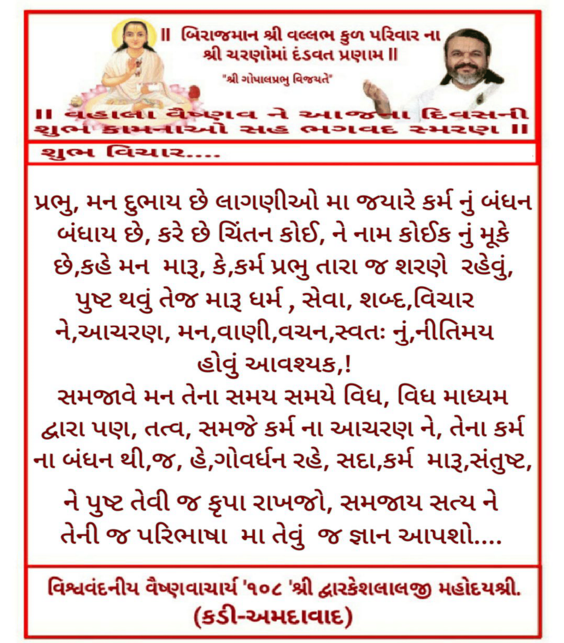 In Pushtimarg, Vasant Khel is one of the most awaited Maha Utsav by all Pushti Vaishnav. Vasant Panchami marks the beginning of the “Khel” festivities. Why “Vasant Khel” in Pushtimarg is celebrated before 40 days? Transition period for any season is for 40 days after which season sets in a full bloom. Thus “Vasant”, the king of all seasons; it’s Utsav starts before 40 days. These 40 days of “Vasant Khel” are split into 4 equal segments of 10 days each. Each 10-day segment is presided by different “Yuth” of Swaminiji. While 10 days of each segment represents 10 different Bhav that describes Rasatmak Thakorji’s 10 types of “Ras”. These 40 days of (Hori) Vasant khel are organized in a definite sequence to systematically guide Pushti Vaishnavs to acquire “Sakhya / Sakha Bhav” on the foundation of Dasya Bhav and ultimately to the “Madhurya Bhav”. In this, the first segment of 10 days that starts from Vasant Panchami (Magh Sud Panchami) – which is known as “Vasant Khel” and represents Rasatmak Thakorji’s aloukik Rajas Leela. During these 10 days, main “Ras” is “Shant Ras”. Hence light Khel is done to the Yugal swaroop by which Yugal swaroop enjoys the natural beauty of this pre-blooming days of Vasant (Spring season). Tenth day after Vasant Panchami, that is; Magh Sud Poonam, which is known as “Hori Danda Ropan”; marks the beginning of Dhamaar Khel – representing the period of aloukik Tamas Leela. As the name indicates, a “Dand / Danda” is installed in the ground by following vedic rituals, marks beginning of Hori Utsav. Thus, In Shreeji (Nathdwara), Danda Ropan is done on Magh Sud Poornima (Feb 16, 2022), that is exactly one month before Holi (Falgun Poornima, Mar 17 / 18, 2022). While the same Utsav at Brij (Vraj) is done on Vasant Panchami day (Feb 5, 2022) and from this day onward, festivities of Holi in Brij (Vraj) is celebrated.

The length of 8 hands or approximately 32 feet of “Danda” is installed at Nathdwara. At Nathdwara, trunk (તના) of Ashok tree is used as Hori Danda. Why Ashok tree? Few important Bhavatmak details are as follows:

• In every Utsav / Mahotsav and for auspicious kaarya (મંગલ કાર્યો), “Mala” of Ashok leaves are tied at the doorstep because, the leaves of Ashok are an indicator of “Mangal”. • Ashok is the tree that eliminates “A-Shok” (શોક ન ંહરણ કરવાવાળ ંવૃક્ષ). Which type of “Shok”? It is explained that when there is a lack of “Urja” in life then at that time, Jeev is surrounded by “Shok”. When “Divya” or Aloukik “Urja” fails to hold Jeev within it’s own strength; at that time, Jeev feels helpless or incapable to face the circumstances. Ashok is the one who eliminates such “Shok” • Ashok is the same tree under which Sita Mata had sat to perform her “sadhana” for Shri Ram • Typically, the roots of Ashok tree have capability to reach very deep in the ground. It symbolizes the Bhav that it helps Bhakt to become very much deep-rooted meaning; “Antarmukhi” due to which Bhakt can acquire higher level of aloukik Bhakti. Also, it provides so much depth and greater aloukik level that most of the “Bahirmukhi” factors cannot reach / influence such Bhakt • A typical characteristic of Ashok tree is that it never loses all the leaves together. Meaning, it loses few leaves and once new leaves grow at those places only thereafter loses some more leaves from different places. In other words, externally it always provides impression of being green. Thus, in Bhavtamak swaroop, it never makes own sacrifice visible to others meaning, it symbolizes those Bhakt who always keep their “Virakt Bhav” as “Gupt”. This is one of the main aspects of spirituality i.e.; Adhyatmikata of Ashok • While the new leaves that are born on this tree, having reddish color and they are tiny and delicate (કોમળ) in their appearance. This indicates the Bhav that Jeev’s spiritual life must begin with Anurag (Red color indicates Anurag) then only Jeev can transform into the Satvikata (Mature leaves are in green color as the Green represents Satvik Bhav) in the Bhakti-marg. • Such “Sato” Bhav is not possible without having Aloukik Prem (Anurag) • Leaves, branches, bark (છાલ) etc. are thoroughly removed from Ashok tree and the trunk (તના) of Ashok tree is scrubbed till it becomes very smooth (મ લાર્યમ). Bhavtamak swaroop of this is explained as, when all options / doors are removed for Bhakt to become “Bahirmukh” only then, Bhakt can become focused inside own Antah-karan and thus become “Antarmukhi”. • When all doors to become “Bahirmukh” are closed then and only then, Bhakt can become “Din” (દીન) meaning, soft (મ લાર્યમ) from within.

Such trunk (તના) of Ashok tree is inserted in the ground that represents “Deh” of the Bhakt. Such Danda (Deh of the Bhakt) has every control (સંર્યમ) on self but for others (externally); always appears very humble and soft (મ લાર્યમ). This stage is called the beginning of “Sakhya” Bhakti. Hence, the base of the “Sakhya” bhakti is such “Dasya” Bhakti. Thus this “Danda” of Ashok tree indicates the base requirement of “Dasya” Bhakti. All basic “Gun” of this “Danda” such as; • Close every door that makes Jeev “Bahrimukh” • To become “Antar-mukhi” • To become very humble (દીન) and soft (મ લાર્યમ). • Enable to see Bhagvad Ansh in every Jeev and thus deepen the “Das” Bhav • Etc When all these acquired then only, Bhakt qualifies for “Sakhya” Bhakti. This “Sakhya” bhakti is not to have fun from Dhamaar or, having “Khel” with Gulal or, sing Kirtan in front of Thakorji; but this “Sakhya” bhakti is considered eighth Bhakti in Navdha Bhakti. After acquiring this “Sakhya” bhakti; only “Atma Nivedan” Bhakti is left in Navdha bhakti meaning; it is quite an elite level of Bhakti. Thus, Bhakt acquires “Sakhya” Bhakti only after acquiring “Paatrata” (પાત્રતા) in first 7 types of Navdha Bhakti and in “Sakhya” bhakti, Thakorji in spite of being “Sakha” of such Bhakt; it is utmost critical to always remember Maryada, respect, dignity and “Samarthya” of Thakorji. Bhakt must always remember that although he is a “Sakha” of Thakorji but predominantly, he is in true sense, only a “Das” of his Thakorji. Pushti Bhakt must always remember that although Thakorji has due to HIS sahaj Gun of Anugrah and Mercy (ઉદારતા); has given him HIS “Sakhya” Bhakti Daan but fundamentally Bhakt is mere “Das” of his Thakorji all the time. Secondly, in “Sakhya” bhakti, theoretically such Bhakt has equal rights (સમાન અધિકાર) with his “Sakha” –

Thakorji meaning, such “Sakha” keeps Bhakt in whichever condition along with all Ups and Downs of life; Bhakt must always merrily accept all such incidences / events of his life with total and firm faith.

Danda Ropan has “Sukshma” Bhav of Nandalay as well. Accordingly, Nandraiji along with Yashodaji, Krishna, Dauji, Rohiniji and samgara Gopi jan meaning with entire parikar, they go at the intersection of Vraj (મધ્ર્યના ચૌરાહા ઉપર) to perform Danda Ropan. Entire Parikar completes the Danda Ropan by following Vedic rituals and Vedic Poojan and while returning, they all start playing the Hori Khel throughout their way by sprinkling Gulal among themselves and on other pass-byers. When their Khel Utsav for the day got over, the entire parikar takes bath in Yamunaji before returning to their respective homes. Based on this Bhav, Hariraiji in Aap Shri’s “Basant Bhav Bhavana”, explained the Adhi-Daivik Bhav of Danda Ropan as follows: From this day, Thakorji adorns White Vastra. In Nitya Kram, from next day; Thakorji wears “Gherdar Vagha”, Thakorji adorns only Shringar made of Gold, for Thakorji’s Samagri – in place of Khichadi, now white rice is prepared, samagri for Shit-kaal is stopped, etc. Thakorji now adorns a “Fent” (ફેંટ / પોટલી) of Gulal in both Shri Hast and a “Pichakari” (ધપચકારી) is also kept next to Thakorji. When “Bhadra” is in the morning then Danda Ropan is done after Shayan Bhog while if “Bhadra” is in the evening then Danda Ropan is done after Mangal Bhog.

Roast the Mawa in a pan till it is dry and separated. Heat Besan with tbsp. of Ghee and let it cool down. Mix Mawa, Sugar, Almond and Pistachio powder and Besan. Mix well and form desired shape of balls. Mix ½ cup slightly warm Ghee with 3 tbsp. powdered sugar and keep aside. Add 3 tbsp. of liquid ghee to the flour and form a soft dough. Roll into thin oblong puri and put the ball prepared earlier on one side, and fold, and fold the puri to cover the ball. Press lightly and cut off with katori so that the additional part of puri is cut off. Deep fry in Ghee on low flame. When cold cover with the mixture prepared earlier. Repeat with the remaining Ghari. Sprinkle slice of almond and pistachio.

END_OF_DOCUMENT_TOKEN_TO_BE_REPLACED 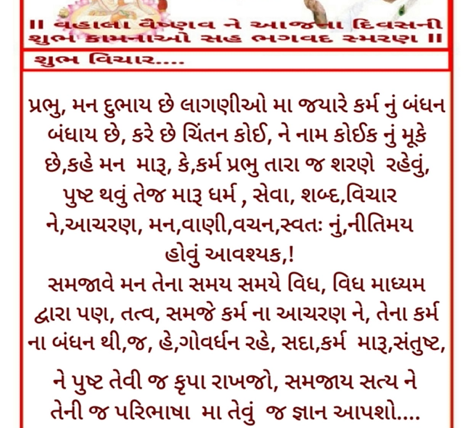